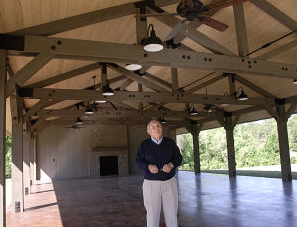 A decade ago, the 35 acres next to Village Hall was an overgrown jungle with large mounds of dirt and an old dilapidated building.

“It was really ugly,” said Pinehurst Heritage Foundation member Joyce Franke. “There were all kinds of ugly weeds growing there and mounds of dirt.”

Hoping to create a place where people could gather and enjoy nature, Franke reached out to the Village Council in January 2003 and asked the board to consider leaving the area natural.

“I thought with all that land there, we needed something good to happen,” Franke said.

Franke’s idea was the impetus for creation of the Pinehurst Arboretum. A decade later, the final large piece of the Arboretum will be unveiled Thursday when the Timmel Pavilion is dedicated in a private ceremony.

The Timmel Pavilion at the Meadow is a 30-foot by 60-foot covered structure open on three sides that has rocking chairs, an outdoor patio, a fireplace, ceiling fans, tables and interior storage space. Designed and constructed to reflect the principles of Frederick Law Olmsted, the open-air pavilion is located in the upper part of the Meadow.

The Village Heritage Foundation raised the money for all the projects at the Arboretum. The village of Pinehurst owns and manages the Arboretum and its facilities through the Parks and Recreation Department.

Designed to be consistent with the natural feel of the Arboretum, the covered, open-air pavilion has been generating interest from the public for weeks.

Jim Lewis, the foundation’s treasurer, remembers being skeptical of how the pavilion would be used when it was first proposed several years ago. Now, he is convinced it will be an asset for residents and visitors alike.

“In the beginning we wondered how this (pavillion) would be used. Now it’s a case of ‘if you build it they will come,’” Lewis said. “People are approaching us with a variety of uses.”

“Anytime I’ve been out there and someone walks by with their dog, they always stop and stand there and take a long look at the pavilion and say, “Wow, that looks fantastic.”

The pavilion is named in honor of Lisellotte Timmel, who left a significant donation to the Village Heritage Foundation. Timmel died in November at the age of 101. The pavillion is expected to be used in a variety of ways, including wedding receptions, family reunions, church and other gatherings, or meetings to name a few.

“Everyone who has played a role in making this happen can and should take pride in this project,” Lewis said. “In time the arboretum and the pavillion will take their place among the other icons of Pinehurst.”

No reservations of the pavillion will be accepted until after the dedication and after the village completes a fee schedule for its use.