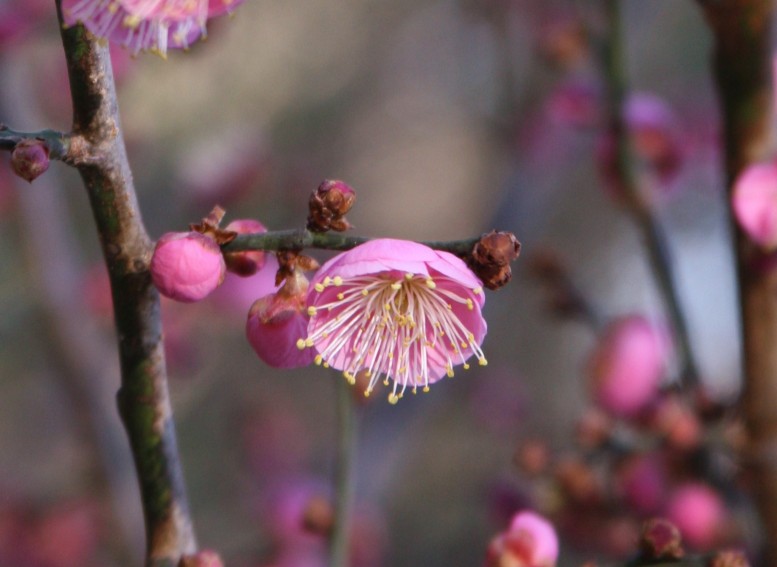 Original Article Posted by The Pilot:
http://www.thepilot.com/news/features/arboretum-s-flowering-garden-nears-completion/article_8f275f56-6c0a-11e4-be1c-9b6162bc8a12.html
BY MARY ELLE HUNTER Special to The Pilot

An exciting finish to the decade-long ­creation of Pinehurst’s Arboretum is in the immediate future.

Following the conception of the Magnolia Garden at the corner of McCaskill Road and Magnolia Drive, to the turning of what was once the site of the former village landfill into the delightful Joyce’s Meadow, and the restoration of the Longleaf Pine Savannah, now is the time when planting of the last of more than 100 trees in what is known as The Kraffert-Russo Flowering Tree Garden will be ­completed.

Anne Russo Goodwin, one of five offspring of the late Dr. Frank and Nancy Kraffert Russo, came up with the ­inspiration to honor her parents and ­grandparents earlier this year. She explains that the family has been coming to Pinehurst for many years.

“The house on Pinehurst No. 2, which was the local ­residence of my grandparents and my ­parents, is now where members of our family gather,” she says.

Family history indicates that her ­grandfather Benjamin Kraffert and his wife, Florence, first came to Moore County in the 1920s.

“My grandfather was a champion golfer, and I recently unearthed an old scrapbook displaying evidence of his golf games and his partners,” she says. “My grandmother was a gardener who specialized in creating floral arrangements. My mother and father followed in their footsteps. Mother became a member of the Silver Foils and was an avid gardener, among her many other ­accomplishments, and my father was an accomplished skier who also excelled in ­tennis and golf. Consequently, as I considered what would be the best way to honor my ­parents and grandparents, I thought of ­involving the Arboretum, where I have often taken long walks through its ­beautiful surroundings.”

A meeting with Jim Lewis followed. Lewis is a member of the board of the Village Heritage Foundation, which developed the Arboretum and in the same manner earlier oversaw the restoration of Pinehurst’s Fair Barn.

“We started work on the Flowering Tree Garden in the late ­winter months of this year,” Lewis says. “Then, in the spring, I was approached by Anne Goodwin, who expressed an interest in making a gift in the names of her parents and grandparents.”

Ultimately, Goodwin and her siblings decided that they would like to become the major benefactors of the one-acre plot of land, which would allow the garden to be named The Kraffert-Russo Family Flowering Tree Garden. Lewis notes that other patrons have joined in the community effort to see that this beautiful garden can be appreciated by all.

He mentions that its deferral was ­occasioned by the other areas of the Arboretum needing more urgent attention, such as the Magnolia Garden, Joyce’s Meadow and the Longleaf Pine Savannah.

“Then came the creation of the Flowering Tree Garden,” says Best. “The existing mature trees formed the perfect setting for shade-loving flowering trees, while open areas provided the setting for the sun-loving species.”

Best also points out that in the garden there are native species as well as decorative species, which showcase the abundance of possible varieties. In addition, there will be a small orchard of peach trees, which represent the importance of this agricultural fruit to Moore County.

“In time, as the nearly 100 flowering trees flourish, this connection to the village will form a wonderful edge for the Arboretum,” he says.

The completion of the work on the garden will take place this fall with the planting of the 30 peach trees that favor the cooler ­temperatures.

It will be in time for the Russo family to hold a private dedication ceremony during Thanksgiving weekend.

Anne Goodwin has fond memories of coming to Pinehurst as a child, particularly the softness of the air and the wonderful scent of the pine trees.

“I loved the old tennis courts and exploring the Village Green between the chapel and the library, and of course there was always the excitement of playing bingo in the Carolina Hotel,” she says.

Perhaps the most poignant memory Anne Goodwin has concerns the tradition of the name her grandfather gave to the property that he and her grandmother initially acquired in Pinehurst.

“He used the first two letters of the names of his five grandchildren, my siblings and me,” she says. “We have carried on the legacy of the family in having the same combination of letters — CHRODITOAN — appear on the plaque that has been placed in the Flowering Tree Garden by the Kraffert-Russo family.”