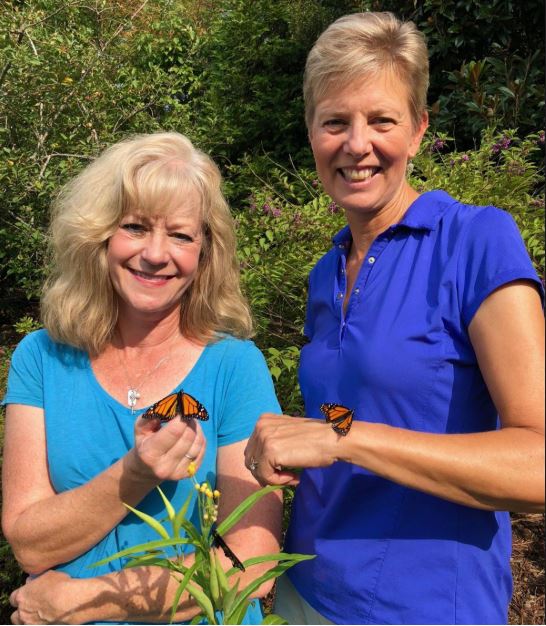 It’s been nearly 20 years since Beth Stevens first walked the land with her mother. It was littered with trash, auto scrap and broken china. Stevens waves her hand and turns to look up the hill.

“This was the village landfill,” she says with a laugh. “My mom and I would come here, and she’d be walking around saying, ‘Beth, can you imagine this?’ She’d point out what she’d want over there. I’d kind of smile and say, “Ok, I’ll try to imagine it, Mom.”

Her mom, Joyce Franke, took her vision and made it a reality for the Pinehurst community.

“She loved the village of Pinehurst and had a passion for creating a sense of community,” says Stevens, who, along with her brother, Ned Franke, serves on the board of the nonprofit Village Heritage Foundation, which was formed in 1993 and led by Joyce Franke.

Franke was instrumental in leading the effort to restore the historic Fair Barn and creating the Village Arboretum. She died in 2014 at the age of 83.

She was known for spending hours in the Arboretum’s meadow, which was named in her memory in 2014, to find ways to improve the experience for the community.

“She wanted people to get out, walk and enjoy nature,” says Stevens.

One of Franke’s ideas for the Arboretum was a native landscape near the bottom edge of what is now called Joyce’s Meadow.

“We always wanted to bring the wood’s edge up the hill so it would transition to the meadow’s open space,” says Larry Best, a retired landscape architect, who worked with Franke in 2003 on the master plan to transform the 35 acres next to Village Hall from a tangled mass of vines and piles of debris into the Village Arboretum.

“It’s about understanding the land and how to create linkages throughout the grounds. It’s amazing to see these trees,” he says, pointing to the hardwood trees that hug the walkway below Joyce’s Meadow. “Those trees were planted 15 years ago, and on a summer’s day like today, it’s an oasis. It’s what she imagined.”

The Native Pollinator Garden will showcase a variety of native plants and grasses with something blooming spring, summer and fall that will attract all kinds of pollinators, from butterflies and moths to bees and birds.

Stevens, a biologist who led the conservation and environmental efforts of the Walt Disney Company, says the project is a natural fit for her. The garden will play a vital ecological role in support of pollinator populations, which have been in decline due to loss of habitat and overuse of pesticides and herbicides.

The first phase of the plan for the Native Pollinator Garden is a 10,000 square-foot area that is bordered by walkways with a meandering path leading to the center of the garden.

“We plan to make it very dynamic space,” she says. “A vine-covered shade structure will allow visitors to overlook the garden and interpretive signage will point out what’s in bloom and which pollinators are visiting in each season.” A “perch rock” fitted with a water source and located near the structure’s entrance, will facilitate “puddling,” whereby butterflies soak up inorganic salts through their feet.

The level of planning and detail in the garden design will make the Native Pollinator Garden an attraction for naturalists as well as families.

The Village Heritage Foundation invited biologist Lynda Acker to plan the garden. Acker, who is well known in the community for her work on The Healing Garden at the Clara McLean House and the Hospice Gardens at FirstHealth Hospice and Palliative Care, is also a lecturer on native gardens, monarch butterflies and pollinators at the Chautauqua Institution in New York.

“This garden is the right thing to do for the environment and the community, and it’s an exceptional educational opportunity,” says Acker, who describes the garden as 80 percent native flowering perennials, including host plants, and 20 percent native grasses.

Acker says that in addition to varieties of milkweed, which is the essential host plant for monarch butterflies, there will be many other types of host and nectar plants to attract a wide range of pollinator species.

“We hope to attract many species that are rarely seen here because of the lack of suitable habitat,” she says.

Pinehurst Resort has offered the use of their greenhouse space to grow 4,500 plants, which will be purchased from their landscape vendors’ catalogs at cost savings to the Village Heritage Foundation. The plants will be raised in an area that is protected from chemicals and pesticides.

Most plants will be purchased as plugs and transplanted into larger pots to grow in the greenhouse during the late winter. After the last freeze, the plants will be transferred and installed by a professional landscape contractor.

“Initially, some management will be involved, but once the area becomes established, it should be fairly easy to maintain,” says Acker. “Native plants require no fertilizer, and their deep roots make watering essentially unnecessary.”

The Village Heritage Foundation is actively raising funds to complete the $90,000 project. Once the project is complete, the Foundation will hand the project over to the village of Pinehurst to maintain.

The village of Pinehurst is providing the site work that will begin in the fall, which includes turf removal, soil amendment, irrigation and the construction of the walkways that will encircle the garden.

“The Village Council has been extremely helpful and supportive of this project, and we could not begin it without them,” says Stevens. “This will add an exciting new dimension to the Village Arboretum, and it will be cherished and embraced by everyone who visits it.”

“The lovely shaded structure that overlooks the garden will make you feel you’re sitting in the habitat and the signage will help you understand the life cycles of these pollinators,” says Acker, while emphasizing that the garden will look like a natural field. “It’s not going to be shopping mall pretty all the time. It will not be mowed in the wintertime and will look a little wild. It’s during winter that the cocoons and chrysalises are overwintering. Come spring, when we get the fresh flush of bright green, and things come out of dormancy, it becomes magic.”

Acker says the area will draw school field trips and garden clubs among other organizations. There are also plans underway to bring a monarch butterfly festival during the fall monarch migration. The event would offer a weekend of science, education, art, and celebration of monarchs as well as other pollinators.

“This garden will be an amazing way to reach the little ones so they can grow up to be stewards of nature and help protect this beautiful world,” says Acker.

The Village Heritage Foundation was established in 1993 to promote the preservation, restoration, enhancement, and maintenance of the distinctive character of the historic village of Pinehurst.

Claudia Watson is a freelance writer. The article is reprinted with permission of The Pilot, Southern Pines, NC 28387