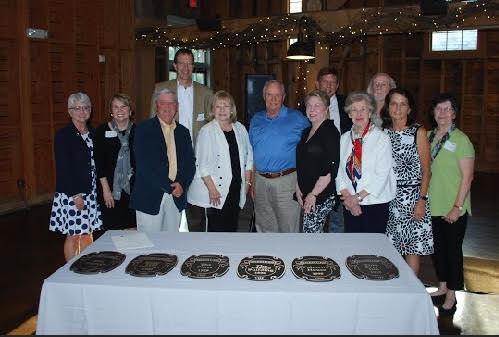 The Village Heritage Foundation has added another six properties to its “hall of fame” through the annual Historic Plaque Awards program. They were recognized at an awards ceremony Thursday afternoon at the Fair Barn.

The program was established in 2016. This marks the fourth group of properties to receive the honor.

Awards were presented to Elm Cottage, Holly Tree Cottage, The Pines, the Casino Building, Palmetto House and the Pine Crest Inn. They join 16 other properties that have received the award the three previous years.

“This mission of the Historic Plaque Program is to encourage the recognition, preservation and restoration of the historic buildings of Pinehust, to encourage the recording of Pinehurst’ unique history, and to make that history accessible to the residents of and visitors to Pinehurst,” said Ned Franke, vice president of the Village Heritage Foundation (VHF) in his opening remarks. “With this year’s recipients, we have now recognized 22 historic properties.

“The selection process is very thorough and accomplished through the dedication of our hard-working committee.”

Owners of the respective properties were recognized. The following are brief descriptions of the properties provided by the VHF:

* Elm Cottage at 220 Cherokee Road was built in 1895 and was originally called “Heartsease.” It had four rooms and was intended to meet the rental needs in the village.

H.C. Buchan bought it in 1921 and then sold it to Isham Slege a year later. He was secretary/treasurer of Pinehurst and served on the school board for 37 years, and was the director of the Bank of Pinehurst. He raised his family in Elm Cottage and remained there until his death in 1958.

In 1986, Mary and Paul Zimmerman bought the cottage and did a renovation while retaining the historic character. The current owners are Daniel Bennett and Sally Cummings.

* Holly Tree Cottage at 115 Chinquapin Road was built in 1922 and was commissioned by Mr. and Mrs. H.H. Rackham of Detroit. They purchased two lots for their large Tudor Revival home. Rackham was a lawyer and one of the 12 original investors in the Ford Motor Co. The home was almost fully electric and included one of the first Kelvinator refrigerators in Pinehurst..

It has recently again been revived and restored, and provides “an excellent example of the style and quality of homes” built in the village in the 1920s. It is owned by Rick and Lynda Whifield.

* The Pines at 140 McKenzie Road was built in 1929. The Colonial Revival was one of the last large houses built before the Depression hit. It features Flemish bonded brick and a gable roof, with a two-story wing.

The property is surrounded by a 7-foot brick wall along the back and side yards, and there is a detached three-car garage with guest quarters. The home is owned by John and Elizabeth Webster.

* The Casino Building at 5 Chinquapin Road was built in 1896 and was one of the first public buildings in the village. It was one of the most popular spots in the early years, housing a cafe, ladies parlor, smoking room, reading room and game room. In 1905, the Pinehurst administration offices began moving in and remained there for six decades.

It has served as the main offices of Pinehurst Properties for many years, and in 1989, Peyton and Martha Gentry completely renovated the building.

* The Palmetto House was constructed by Pinehurst founder James Walker Tufts in 1895 as one of the first apartment houses in the village, with 10 guest suites and servants’ quarters.

Originally there was a carriage house for horses in the rear, which was converted to a garage in 1919. That same year James Barber purchase it and renovated it into four four-bedroom apartments.

In 2006, the McPeaks purchased it and renovated the property to its current configuration with eight condominiums in the main building and two in the Carriage House.

* The Pine Crest Inn at 50 Dogwood Road was built by Emma Bliss and opened in 1913 to provide needed hotel rooms in the village. It was described as an “inn with an unusual home atmosphere.”

Legendary golf course architect Donald Ross — he designed the famed Pinehurst No. 2 — and fellow Scotsman W.J MacNab purchased it in 1921. It has been owned by the Barrett family since 1961.

Each of the homes will receive a large plaque to denote this designation.

Franke noted “how fitting” it was to hold the awards reception at the Fair Barn. Its restoration was the first project of the foundation, which was founded by his late mother, Joyce Franke, in 1993 specifically to raise money for this project. She passed away in 2014 at age 83.

“The mission of the VHF is to promote the preservation, restoration, enhancement and maintenance of the special character of the historic village of Pinehurst,” Franke said.

Franke said the second major program of the VHF was the creation of the Pinehurst Arboretum, “which has certainly become a very valued-in enhancement” to the village.

The open grassy area of the Arboretum was named Joyce’s Meadow in September 2014.

After the presentation of the awards, Franke invited everyone to visit the new Pollinator Garden at the Arboretum, which will be holding a Flutterby Festival Saturday, Oct. 5, from 11 a.m. to 2 p.m., in Joyce’s Meadow to celebrate its opening.