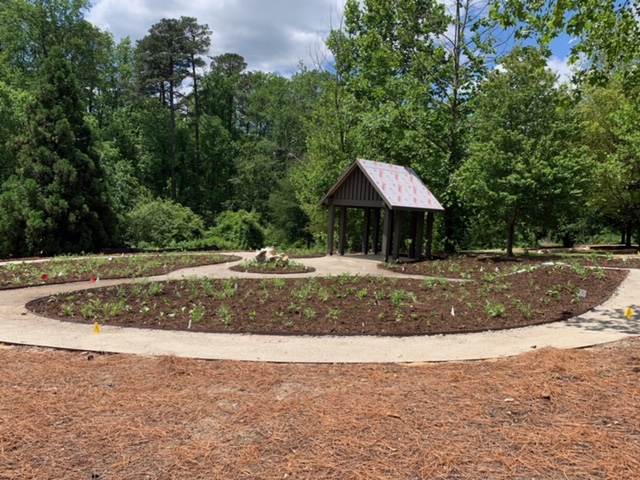 It was the wayward flight of a determined monarch butterfly that has offered enchantment to the recent installation of the Native Pollinator Garden at the Village Arboretum in Pinehurst.

Just days before the garden’s installation, Lynda Acker, the garden’s designer and a biologist who is widely known for her understanding of the increasingly rare butterfly’s life cycle, found several monarch caterpillars feeding upon a few milkweed plants nestled among thousands of pollinator plants being raised in a Pinehurst Resort greenhouse. That monarch sought out milkweed, the only plant that can host its eggs and the plant that its caterpillars need to survive.

“There are very few ways that a butterfly could get into that greenhouse, and it’s very unusual to find them in the thick of things there,” says Acker. “This one was obviously on a mission and has offered our new garden its special version monarch magic.” 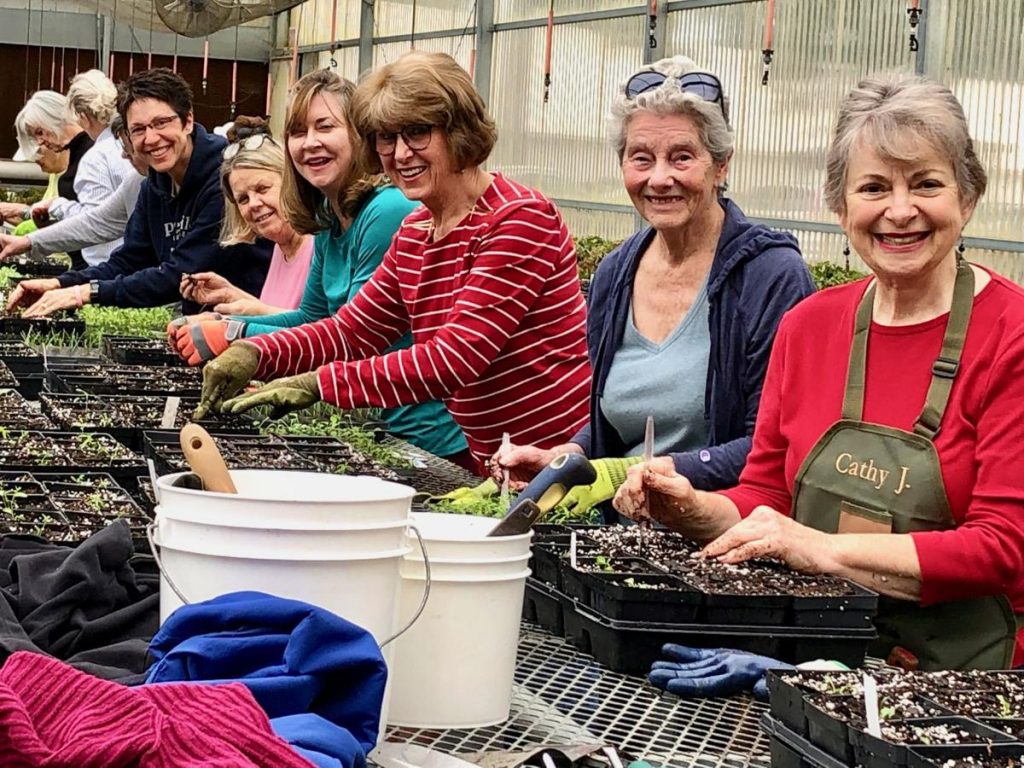 That caterpillar discovery is the type of educational moment that Beth Franke Stevens, president of the Village Heritage Foundation, wants the public to experience. Stevens manages the Arboretum’s newest project, which plays a critical role in the conservation of pollinators.

Pollinators, including bees, butterflies, moths and birds, have been in decline due to loss of habitat and overuse of herbicides and pesticides. The garden showcases native plants that anyone can plant in their garden to attract pollinators. Eighty percent of the garden is native flowering perennials, including host plants, such as milkweed, and 20 percent is native grasses.

Stevens invited Acker, who is well known for her work at the Healing Garden at the Clara McLean House and FirstHealth Hospice and Palliative Care, to work on the development of the garden.

Retired landscape architect Larry Best, who worked on the Arboretum’s master plan in 2003, sited the new garden as a transition between the Arboretum’s wood’s edge and the meadow’s open space. The first phase of the garden, a 10,000-square-foot area, is bordered by walkways with a meandering path. A shaded educational structure offers an overlook to the garden, and interpretive signage will point out what is in bloom and the type of pollinators visiting each season.

Pinehurst Resort offered the use of their greenhouse space so the plants could be raised in an area protected from chemicals and pesticides. Seeds for the native plants were sown, and as February’s cold wind and rain took hold outside, the warm greenhouse optimized the seed’s growth.

By early March, more seeds had sprouted than anticipated. Members of several area garden clubs met to separate the tender seedlings and transplant them into larger pots. At the end of that session, which lasted about four hours, nearly 4,000 seedlings had been transplanted, yet the job was not complete. A few days later, the remaining seedlings were transplanted – and as a result, nearly 8,000 plants thrived. 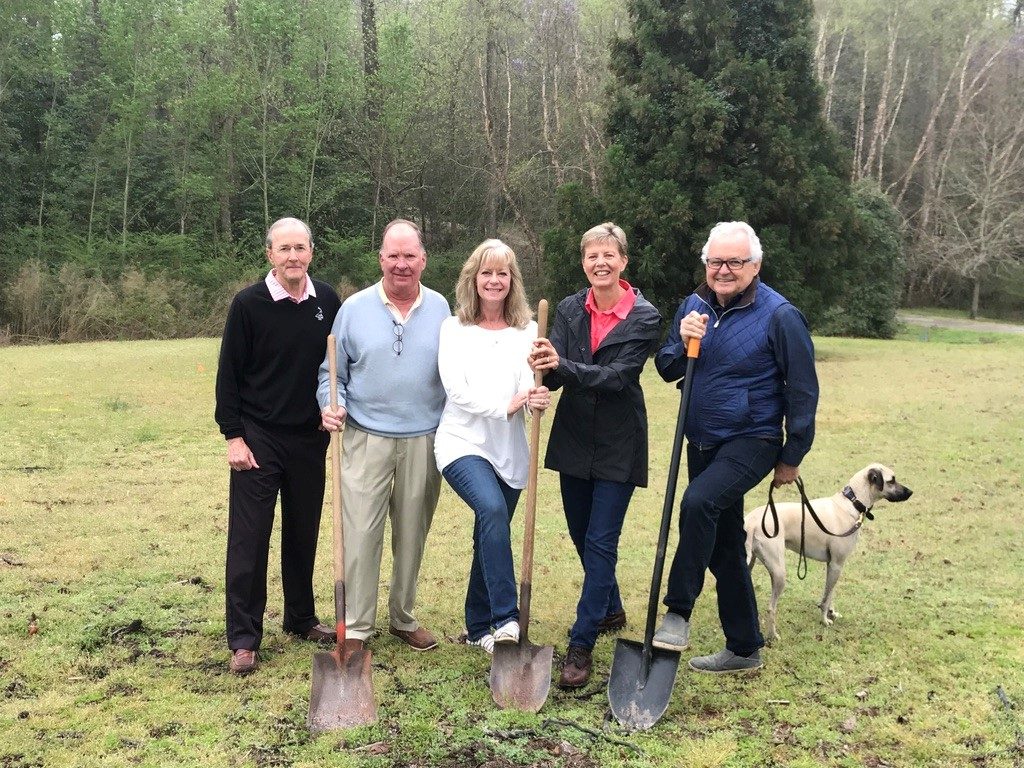 The official groundbreaking for the garden was held in early April, and Pinehurst’s Department of Public Works began preparing the hillside along Magnolia Road just south of Joyce’s Meadow. Landscaper Richie Cole and his team arrived, and work ensued to prepare the site, amend the soil and install the irrigation, which will only be needed until the garden is established. Once established, it will not require irrigation, fertilizers or pesticides, and will require little maintenance.

The centerpiece of the garden is the ancient river-carved “perch rock.” The rock provides a close view of butterflies congregating and “puddling” to soak up inorganic salt and other nutrients through their feet.

On the day of the garden’s installation, a small group of gardeners gathered at the greenhouse and began the formidable task of transporting nearly 2,000 plants to the site. The early morning convoy was led by Cole’s truck and several gardeners’ vehicles, which were repeatedly loaded, unloaded.

Each gardener took responsibility for a variety of plant and clusters of each plant were placed and installed by Cole’s landscape crew. Butterflies began fluttering around the new plants before the installation was complete.

Many of the leftover plants were donated to Pinehurst Resort for use in their landscape. The remaining plants were sold to local gardeners to help offset the $90,000 project. 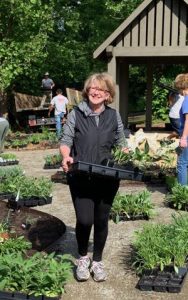 Lesley Berkshire Bradley, a former board member of the Village Heritage Foundation, was one of several local gardeners who helped transfer nearly 2,000 plants to the site on planting day.

Once the walkways are filled with gravel and the shade structure’s roof is installed, this phase of the project will be complete, says a smiling Acker. “There’s nothing left to do except watch it all grow.”

Stevens says they are happy to have this phase complete and are looking forward to the arrival of more pollinators.

“It’s like an ‘if we build it they will come’ moment, and we can’t wait for everyone to discover and experience one of the most important ecological processes on Earth. This is a unique educational opportunity right outside our door,” says Stevens. “Without pollinators, we don’t have food.”

As for those young caterpillars that Acker found at the greenhouse, they are growing in a butterfly tent at her home. Soon they will turn into jade-colored chrysalises and about two weeks later, emerge, unfolding their colorful wings — ready to take flight.

Acker will release them on a warm spring morning in the new garden at the Arboretum. Some say these monarchs foretell good luck for the garden, but they also show us the full circle of life. Magic indeed.

Claudia Watson is a Pinehurst freelance writer.
The article is reprinted with permission of The Pilot, Southern PInes, NC 2019