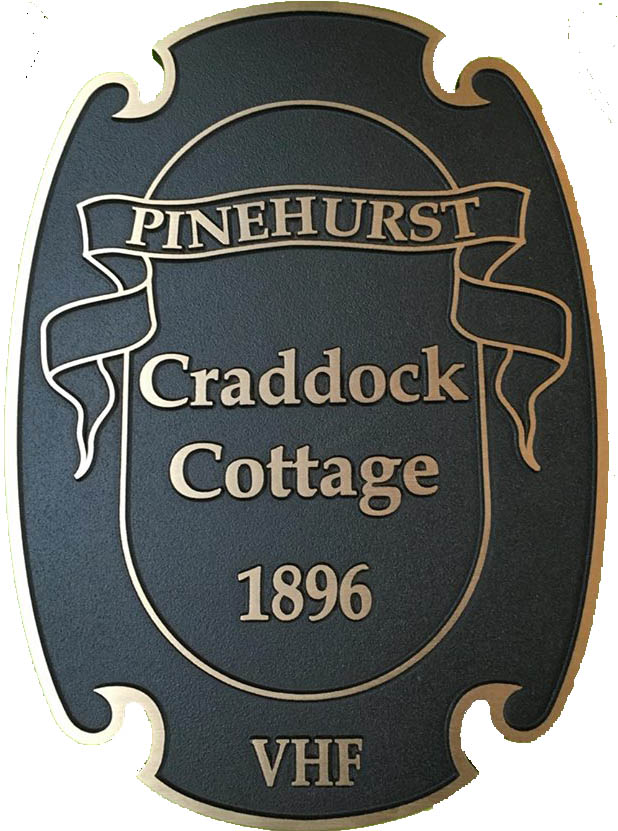 The illustrious histories behind the five Pinehurst homes — and one cabin — to receive the Village Heritage Foundation’s inaugural Historic Plaque awards on Thursday read like threads extricated from the story of the village itself.

Predating Pinehurst’s establishment, the front cabin of the Sandhills Woman’s Exchange was already 85 years old in 1895, when James Walker Tufts dissembled and moved it from Rays Grist Mill to its current location on Azalea Road. It served as a free-standing kitchen and a museum before its reincarnation in 1923 as a place for women to make and sell handcrafted goods.

Selection committee secretary Stuart Mills described Halfway House, so named for its location on Carolina Vista Drive equidistant from both the Carolina Hotel and Pinehurst Country Club, as “a prime example, beautifully historical and sensitively restored, of the second wave” of Pinehurst cottages. Rose Cottage on Magnolia Road was one of the originals built by Leonard Tufts, son of Pinehurst’s founder, while Craddock Cottage scarcely two blocks away was the home of his mother-in-law.

About 20 years after it was built for Florence W. Cunningham and christened Tuckaway Cottage, Liscombe Lodge was rented by Katherine Tupper Marshall, wife of former U.S. Army Chief of Staff General George Marshall. At that time Secretary of State, George Marshall masterminded the nation’s plan to aid in rebuilding Western Europe and rehabilitating its economy after World War II.

The Marshalls purchased the cottage and made it their winter home for 15 years.

“We actually bought the house before we knew the history behind it, and then we learned,” said Jodi Strange, who owns Liscombe Lodge with her husband Allan. “I happen to be the child of my parents who has all the family dishes and the family silver, so the fact that it has history and we’re part of the story that weaves itself through the house … I get this tingle down my spine every time I say it.”

The Stranges, who live in Richmond, Virginia, have owned Liscombe Lodge for a year, embarking on a new chapter for a home whose guests have included Harry Truman, Frederica of Hanover, and Mamie Eisenhower.

Though she was initially unaware of the house’s past, its transcendence of time struck an instant chord with Strange.

“It’s almost indescribable; it’s very warm, decorated beautifully and what I love about it is it’s kind of kept the retro decor while being modern,” she said. “We moved a couple of our pieces in, but it feels like the Marshalls are still there.”

Having purchased the Cottage Colony School as a vacation retreat 20 years ago, John and Carolyn Taylor now make it their home full-time. The house was first put into use in 1918 by May Chapman, who established a school, of equal standard to northern institutions, to educate the children of part-time Pinehurst residents.

When they bought the house, the Taylors set to reclaiming its past from under a layer of 70s-era additions like sash windows and dark stain on the original heart pine flooring.

“We have spent a lot of time thinking about how to maintain or restore many of the original features,” said John Taylor.

“(Builder) Alex Bowness has been fabulous and has had a great eye for detail. We added a second fireplace on and he made sure that the chimney looked like the original chimney and had the same trim. So if you look at it now you’d never know it wasn’t original.”

The Taylors were originally drawn to the home by its character as well as its proximity to the village and the prospect of taking their young children on afternoon jaunts to the old Pinehurst Sundry for ice cream.

“We’ve tended to like older houses, we tend to like a place with a sense of history to it,” Taylor said. “The way you maintain a sense of history is not by bulldozing it and rebuilding it every 10 years; it’s by keeping things the way they were, improving them hopefully.”

The Village Heritage Foundation intends to select five to 10 properties, whether homes, businesses, public or institutional buildings, as plaque recipients annually. Its leaders hope the awards will become a tradition to reward and encourage property owners who tastefully preserve their homes’ historic nature. Fittingly, the first Historic Plaque ceremony took place in the Fair Barn, whose renovations Joyce Franke made the foundation’s first priority when she founded it in 1993.

“(Her) first idea was to renovate this building and to make Pinehurst a more exciting and wonderful place not only to visit, but to live,” said foundation president Terry Brown. “Look how beautiful it’s turned out to be.“ http://www.thepilot.com/news/foundation-honors-six-village-properties-for-historic-character/article_275c64ae-81a5-11e6-b840-530ce64ee217.html