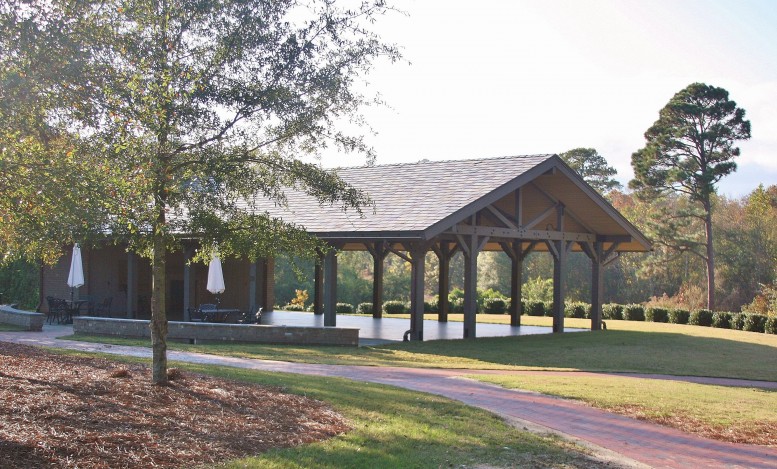 Birdie: By Pinehurst resident Joyce Franke, who spoke out a decade ago to set in motion a movement that culminated Thursday with the private unveiling of the Timmel Pavilion. This is the final large step in the creation of the Pinehurst Arboretum, a marvelous addition to the village ambience.

At the time Franke launched her campaign, the 35 acres next to Village Hall was an tangle of vegetation with piles of dirt and one decaying building.

“It was really ugly,” said Franke, a member of the Pinehurst Heritage Foundation. “There were all kinds of ugly weeds growing there.” She spoke to the Village Council in January 2003, urging that the village turn the acreage into a quiet, pleasant place where residents could enjoy the beauty of nature.

With the council’s blessing, the foundation set out to raise money for the Arboretum, which is owned by the village. Timmel Pavilion at the Meadow, a crowning achievement of the campaign, is designed to harmonize with the tone set by Frederick Law Olmsted, Pinehurst’s original designer.

Kudos to the visionary Franke and all others involved in turning this dream into a lovely reality.

Birdie: By the Aberdeen police and fire departments, for going the extra mile to solicit help from the community to assist the family of Aberdeen Police Lt. Bryan Lett, who is suffering from cancer.

Lett, 42, described as “a dependable, detail- oriented, quiet guy with a very dry sense of humor,” was diagnosed in March during routine medical tests. The finding came as a complete shock to him and his family and friends, since he hadn’t been experiencing any symptoms. He is 10-year veteran of the Aberdeen Police Department, and he and his wife have four children.

The firefighters hope to sell 2,500 chicken tenders dinners in a fundraiser today from 11 a.m. to 7 p.m. at the Aberdeen Fire Station, 800 Holly St.

Birdie: By Steve Borden, executive director of the Moore County Airport, and the Airport Authority, for their continued support of the Young Eagles program. Pilots flew 200 kids last weekend, earning $1,000 in credits from the EAA, enough to send two students from Moore County to the Air Academy in Wisconsin this summer.

Bogey: By the Moore County Planning Board, which rejected an amendment to the county zoning ordinance that would have allowed solar farms – a decision clearly based more on political ideology than on practicality or aesthetics.

Two companies, Argand Energy Solutions of Charlotte and Strata Solar of Chapel Hill, submitted their plans earlier this year with the N.C. Utilities Commission. One of the solar farms would be located outside Eagle Springs, the other near Carthage.

But the local board turned thumbs down. Explaining the decision, said to be unprecedented in North Carolina, Chairman Robert Hayter said the members objected to the fact that the projects would receive subsidies from the federal and state governments. “It’s not a true private enterprise,” Hayter said. “We really don’t want to foster that type of use of government funds.”

If you’re going to restrict an industry based on subsidies, why limit it to solar farms? Think of all the federal agricultural subsidies out theres. Also, we thought conservatives didn’t like the government telling private citizens how to run their businesses. Yet here we have a governmental board telling farmers what they can do with the property that has been in their families for generations.