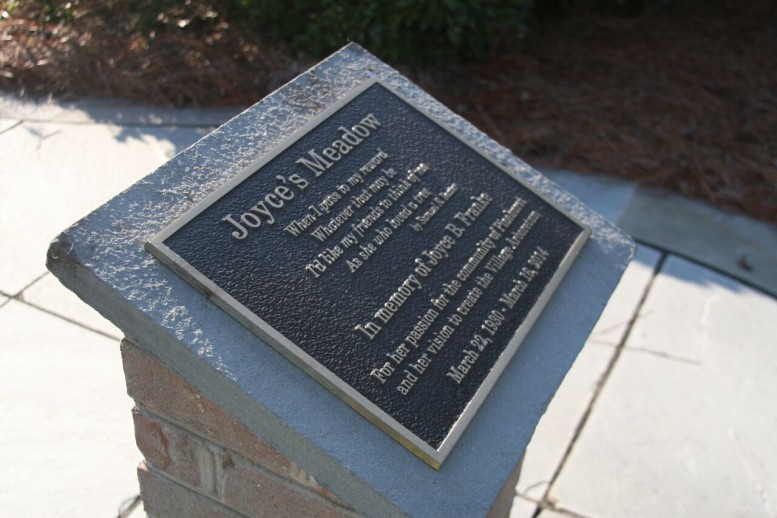 Joyce Franke spent hundreds of hours walking around the Village Arboretum, particularly the meadow, always with an eye toward making it an even better place.

“It was just uncanny that any time I was there, so was she,” said Jim Lewis, a longtime board member of the Pinehurst Heritage Foundation. “She was always there, looking at what could be improved.”

Lewis, like countless others who knew Franke and worked with her over the years, felt it was “absolutely fitting” that the village has named the Arboretum meadow in memory of Franke, who died in March at age 83. It is now called Joyce’s Meadow.

A dedication ceremony will be held at 4 p.m. Thursday, Sept. 18, in front of the Pergola overlooking the Meadow in the Arboretum on Magnolia Drive for a monument.

The monument will be located on the terrace below the Pergola in line with the steps and the live oak in the Meadow. A plaque will be mounted on a short brick column surrounded by a slate floor.

“It is just the right name and the right way to recognize Joyce,” said Lewis, who worked with Franke from the very beginning on the Arboretum. “People know Joyce. I hope 75 years from now, people will say, “This Joyce Franke was a very special person.’”

The recommendation to honor Franke was made by the Village Heritage Foundation, which Franke co-founded and was vice president of at the time of her death. The foundation designed the plaque and monument with the input from Franke’s family and community members. The village and the foundation each paid half of the $10,000 cost of the monument.

In 2003, Franke launched her campaign for the Pinehurst Arboretum, the 35 acres next to Village Hall that was a tangle of vegetation with piles of dirt and one decaying building. The meadow was once the village landfill.

Franke also directed a $2 million renovation of the iconic Fair Barn, almost entirely with private money, in the 1990s. She helped establish the Pinehurst Historic Preservation Foundation in 1993 (which later became the Village Heritage Foundation), for the specific purpose of restoring and preserving the Fair Barn.

“Neither would have happened without Joyce,” Lewis said. “When you make a list of important people in Pinehurst — the Tufts, Donald Ross, Olmsted — you don’t have to go too far down until to you get to Joyce’s name.”