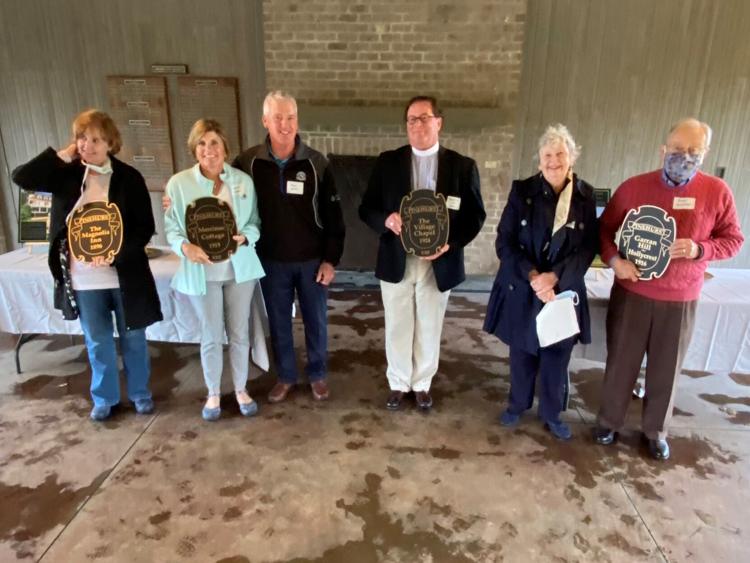 Each year, the Village Heritage Foundation recognizes buildings that even to this day conjure the lives of early Pinehurst’s most colorful characters.

The list of homes, businesses and institutions bearing Pinehurst Historic plaques grew to 26 last Thursday with the addition of Merrimac Cottage, Hollycrest, The Magnolia Inn and The Village Chapel.

The foundation’s Historic Plaque Committee considers architectural integrity in evaluating properties nominated for the awards, as well as the role the building and its inhabitants have played in Pinehurst’s evolution since 1895.

“There are so many wonderful historic properties here that really help to make the village of Pinehurst and give it that special ambiance that most of us probably came here for. So the purpose of this program is really to celebrate those properties and to try and keep some of the interesting stories and history behind the properties alive.”

The original Magnolia Inn is nearly as old as Pinehurst itself. James Walker Tufts, Pinehurst’s founder, established it as a boarding house in 1896 — on land purchased for a dollar per acre — with the idea that it might serve convalescing tuberculosis patients from the northern states.

“Originally the town was designed so that people could come down and stay and get the healthy air,” said Lisa Hammond, a member of the selection committee. “They thought it was a better environment for people with issues. I think that only lasted about one season.”

The inn originally offered 13 guest rooms, each renting for $8 to $12 in the high season. The top two floors were removed in 1914 at the behest of Tufts’ son Leonard.

“He couldn’t see the village from where he was staying in the Carolina Hotel. The top two levels were obstructing his view,” said Hammond.

The inn has spent most of its life as a hotel or boarding house, save for a brief stint as Francis Owens’ medical clinic in the 1940s. Now owned by Ron and Julie Milton, the Magnolia Inn maintains most of its original exterior and the home-away-from-home atmosphere it offered to the village’s original visitors.

Walter Hines Page, who bought the property now known as Hollycrest in 1913, envisioned it as a sprawling peach orchard. Page, the son of Aberdeen founder Francis Page, was a journalist and publisher who served as the U.S. Ambassador to England from 1913 to 1918.

But by the time the Georgian country manor house was finished in 1916 and christened Garran Hill, Page’s work and failing health prevented him from fulfilling the vision of Pinehurst peaches. Ownership passed to Page’s son Ralph until 1940.

“It boasted a view of the Carolina Hotel, the dairy and the golf course. If you’ve ever ridden out there, you don’t see very far this way anymore so you can imagine how barren the land was,” said Laura Byers, a longtime Moore County resident and another member of the Historic Plaque Committee.

Betty Dumaine bought the house in 1959 and added stables and kennels for her horses, hounds and peacocks. At her new estate, which she gave the name Hollycrest, she invited local children to celebrate her horses’ birthdays — when she wasn’t hosting the Princess Mother of Thailand, who had been her high school roommate and with whom she maintained a close lifelong friendship.

When Russell and Ann McAllister bought Hollycrest in 1998 it had sat vacant for the 14 years since Dumaine’s death.

“Ann discovered Hollycrest when she was accompanying a friend on a house hunt. It was unlocked and they went in and she said it looked like a haunted nursing home,” said Byers. “We’re very thankful for Ann and Russell … they’re historians and they have a great appreciation for detail, and they provided the care that Hollycrest so badly needed.”

Merrimac Cottage’s 1,500 square feet places it in the modest category alongside the other 2020 Historic Plaque recipients. But it was even smaller when Roswell Egbert Wicker, the younger brother of Rassie Wicker known around Pinehurst as Bert, lived there from 1919 to 1926.

Bert Wicker managed the Pinehurst Electric Company during a period of swift modernization for the village, and at a time when all commerce in the village happened under the resort’s umbrella. Installing the first telephones in the Carolina Hotel fell to Wicker, as did policing their use.

“In those days, if you wanted to call a friend you didn’t dial a number, you rang up a central operator and asked her to connect you. In the earliest days of Pinehurst, the village was small enough that all you needed was the name of the party that you wanted to talk to,” said committee member Eric Von Salzen.

“By the 20s, Pinehurst was growing too fast and the operators were hard-pressed to remember all of the names.”

The village’s first printed telephone directories were so inaccurate that callers resorted to using names rather than numbers. Residents visiting the resort usually found some pretense to use the office phones rather than going “all the way back home” to make a call, putting Wicker in the position of chasing down 50-cent fees here and 70-cent fees there.

Paul and Lorelei Milan are the 101-year-old cottage’s fourth set of owners. It was expanded in 2012, and its outbuildings renovated this year. But Merrimac Cottage fundamentally remains a simple, single-story, wood-shingled affair emblematic of the homes where Pinehurst’s original year-round residents — known as “cottagers” — lived.

The Village Chapel’s construction in 1924 made it the first building on the Village Green, but the history behind it began in 1908 when the Village Chapel evolved from the Pinehurst Religious Association under the leadership of the Rev. Thaddeus Cheatham.

The interdenominational group started meeting in the old Village Hall, which was renovated with $800 originally raised to build an Episcopal church.

“There were services of Protestants in the morning and Catholics in the afternoon. So very early on, there was this commitment to unity,” said committee member Kathy Spangler. “When they decided to come together as a church, they really accepted religions of many affiliations.”

Not unlike its present-day incarnation, the congregation grew along with Pinehurst until its meeting space was no longer sufficient. So members of the congregation raised $50,000 and Leonard Tufts made a gift of the site where the Village Chapel now sits.

The cornerstone placed on April 13, 1924 contains a Bible, local newspapers, and a list of the Village Chapel’s original members, along with a Pinehurst No. 2 scorecard of Cheatham’s, recording a score of 72.

“The reason they chose him is they felt that he could most likely bring together that idea of beauty and simplicity, and I think when we look at the architecture of the church we can see that,” Spangler said.